8 Things About Qiqi Genshin Impact You Need to Know Qiqi Genshin Impact is one of the mysterious characters. Yet, a lot of her fans can identify her uniqueness.

Qiqi firstly appears during the story. Her first glance appearance may trick us with her appearance on the battlefield. Below are some things you need to know about Genshin Impact Qiqi.

At first glance, she looks like a little girl helping in the pharmacy. She presents us with a young appearance. However, her dialogues are not always like a young child.

Qiqi knows her strengths very well. Besides, she has dark wishes for one of the characters. Those things become her hidden powers.

Her dialogue may trick other characters with her innocent appearance. It makes it hard for others to figure out how old she is. So, she may appear like a little girl.

On the other hand, Qiqi Genshin Impact Build has playful voice lines. Players can unlock it in the earlier game.

Qiqi has an alive body. Because of that, she works hard to make sure her body is safe and secure. She wants to protect her undead body.

This makes Qiqi Genshin Impact away from hot areas. She prefers to stay in the cooler spots. She avoids the heat to protect her body from a faster-rotting process.

During sunny days, she chooses to stay inside. Additionally, she tries to stay away from really hot out.

Through the brief explanation above, Qiqi enjoys exploring the freezing spots a lot. She can explore herself very well if the area is cold. Besides, she can take her time freely to gather herbs. 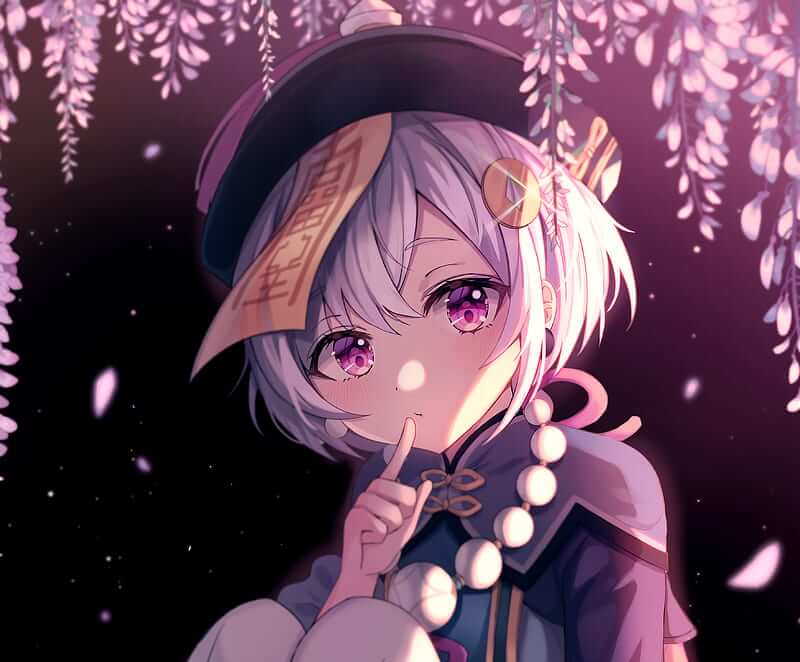 The fact presents Genshin Impact Qiqi as a zombie. Players can notice the signs after some time of playing the game.

However, she adores finch birds. She likes to watch them from the pharmacy. They appear outside of the pharmacy.

Additionally, her confessions about a finch may surprise us. One day, she wants to keep one of them as a pet. She admits that she enjoys finches a lot.

Regardless of her willingness to keep a finch, Qiqi is not best for being a pet owner. She has a problem with her memory that has become an obstacle to taking care of a pet. She tries hard to take care of the finch.

4. Give Orders For Herself

This part helps us learn another good thing from Qiqi Genshin Impact Build. She can give orders for herself. It happens because she was awake by herself and not by others.

Although the orders are sometimes complicated, she can give orders on her own. Besides, she sometimes gets stuck on her tasks.

We can see the signs. If Qiqi Genshin Impact gets stuck in gathering herbs, she will stare at one of the bottoms of a cliff.

By giving orders to herself, she can win some fights. Enemies misunderstood her appearance and sometimes underestimated her. Therefore, she wins the battle at ease.

5. Appear As A Special Zombie With Bad Past

From the above explanations, players know that Qiqi is a zombie. Yet, she is one of the special ones. She can awake and have a will for herself.

Most of the time, the creator should give orders to her. She can not ignore the given order. So, she must do it even if the task is impossible.

Besides, she can switch to a different task. It happens if her creator gives her the order to do that. Furthermore, she had a bad past.

There is nothing complicated about Genshin Impact Qiqi. Yet, she died in the crossfire located between Adeptus and Demons. This shows that she has a tragic past.

From the above brief story, we learn that she is a zombie having a painful past. She is not forced to remember her tragic past. She is fine living without remembering her past.

Qiqi is arranged with her current living. It makes her have a better upbringing. Thus, she is not easily killed once she meets enemies.

She can have a new life and make her focus on her tasks. It makes her unique as a zombie because she can ignore her bad past.

6. Have A Regular Exercise

This part tells about another uniqueness of Qiqi Genshin Impact Build. She is a zombie with some downsides. It makes her want to stay as a human.

There are some determinations about that. One of them is doing daily workouts. It is a way to make her body never get stuck. It helps her to remind her how to move properly.

Through regular exercise, she can act like a human. She can walk around and appears like an ordinary character. This activity seems ideal for her character.

Besides, Qiqi Genshin Impact does her regular exercise out of town. We can know it from her words talking about Dusky Ming. That is why doing exercise is better for her.

Qiqi also was imprisoned for some time. Adeptus sent her to seal her inside a piece of amber. She has difficulties controlling her power.

This thing only occurs when Qiqi Genshin Impact Build was alive. She was in a rage. So, she needs some action to stop her.

If her rage action is being ignored, she will destroy things around her. She stays inside the amber for a long time. Thus, it helps to stop her madness act that can be destroyable.

In the earlier paragraph, we know about her appearance like a child. However, her age is mysterious. No one can guess how old Qiqi is.

If we guess from her transformation into a zombie, it can be over a hundred years. Besides, the Genshin Impact Qiqi body does not show a significant change.

She appears forever young and has not aged at all. However, this fact does not bother her much. She is only glad of being alive.

Furthermore, her appearance does not fool other characters. People in Liyue know the Qiqi Genshin Impact, especially when she is on the battlefield.